Adam founded the Danish sunglass brand back in 2016, he wanted to align good quality with great design to affordable prices.

Quality and design walks hand in hand and material used are always an important factors for CEO and founder, Adam Geertsen. The design is generally speaking timeless and with a classy expression while details tapping in to the current trends. 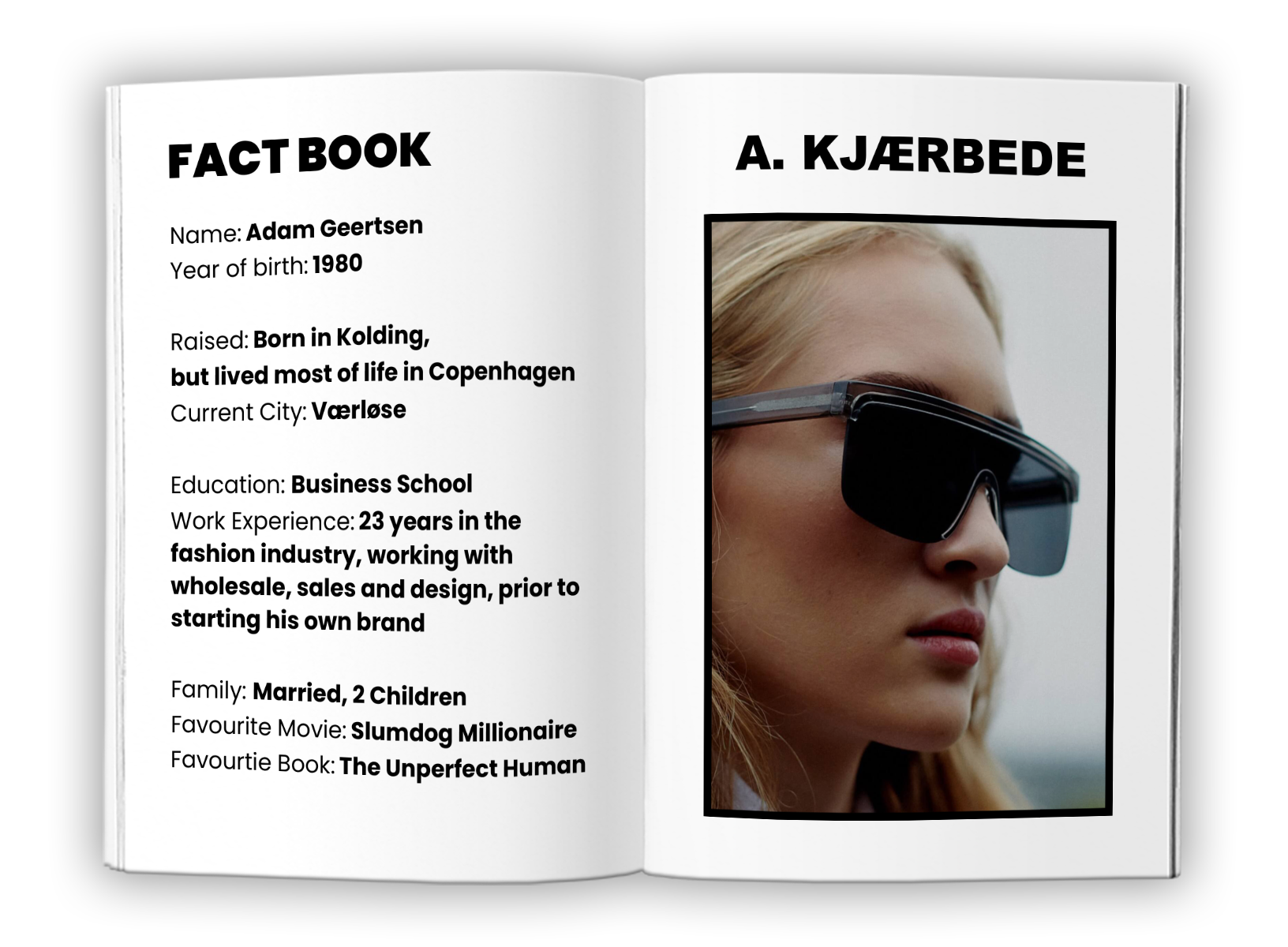 IT ALL STARTED AT A WEDDING DINNER

Adam Geertsen is a Danish founder of the sunglass brand A. Kjærbede. Founded some 5 years ago it has been a fun and learning full journey. It is a wild story with from the real world about how it is being a one-man-army and build a brand from scratch. It is a story about making fast decisions, ‘go all in’ while still having your heart with you, while constantly trusting it.

Let me bring you back to when it all started.

Adam is sitting at a wedding talking with a good old friend about what is up and what is down in the world. Adam is at the time being an active football player while working in the fashion industry in retail shops. He likes fashion, trends and the insights about what people buy at the moment. The two old friends have for some time at random times talked about fashion, watches and jewelry.

The friend and Adam jokes about why not just create their own brand as if others can make it, why should they not be able to do so as well? After some drinking, chatting and giggling the friend bursts out:’What does it cost to start?’. Adam tells his friend it would cost around 100.000 DKK to get started. He wanted to create sunglasses with high quality at low prices. And BAM, with some semi good Bourgogne in the glass during a wedding, Adam will now start a life journey of building up his brand A. Kjærbede.

ONE WAY TICKET TO THE CHINA FACTORY 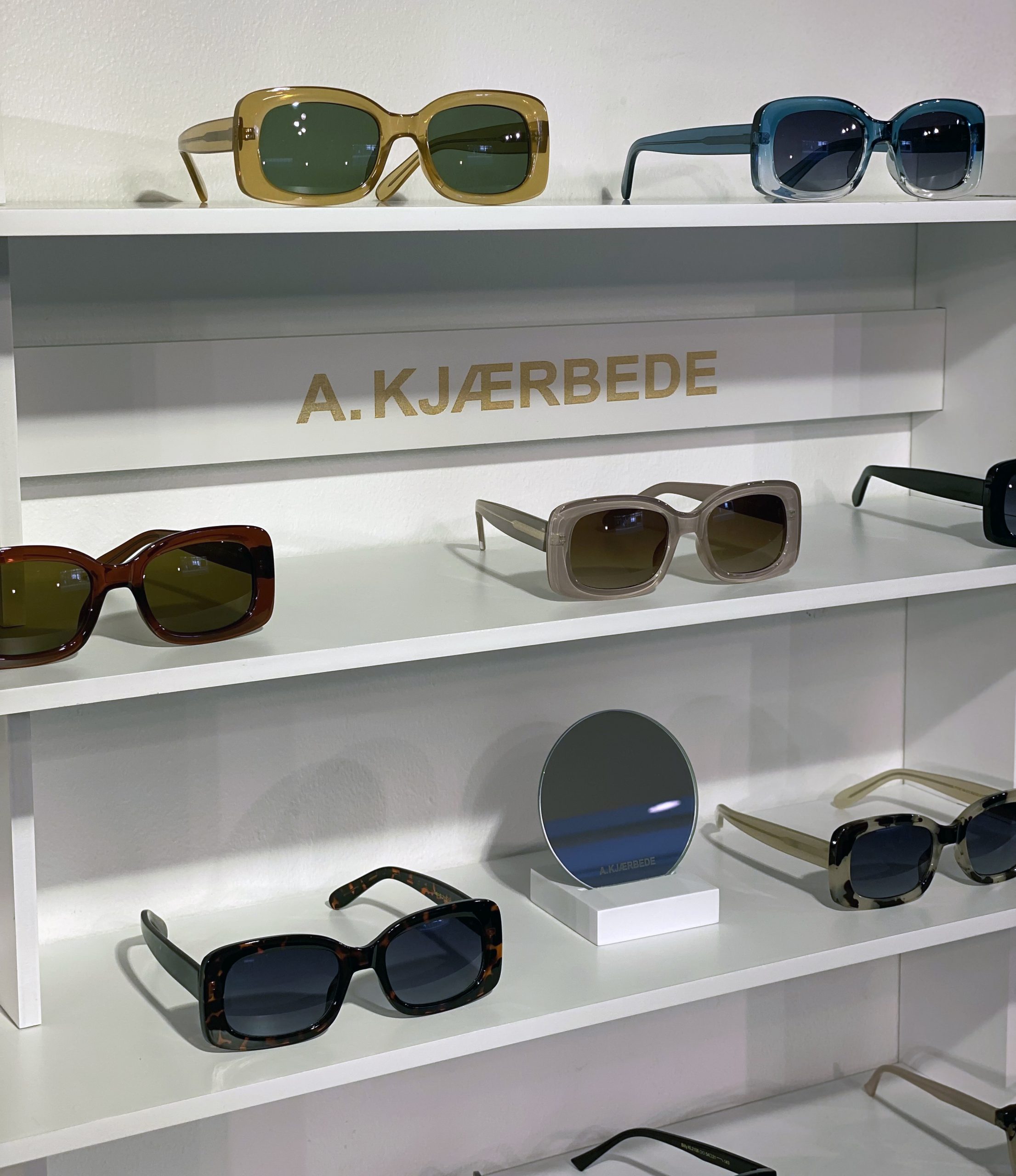 After the two friends decided to build the A. Kjærbede brand Adam knew he had to travel to China and make deals with factories who could produce the sunglasses for him. He was on the lookout for a strong partner that could deliver high quality for affordable prices. With a shady reputation Adam didn’t want to work with all factories in China he only wanted to work with the good ones who could make sure high quality was delivered.

Without any further insight to the Chinese production facilities Adam started Googling his way around for finding the perfect manufacturing partner. After reviewing around 5 factories he wrote the one that looked the most professional, looked like having nice styles combined with high quality. The weird thing was though, that he could not feel the fabric, meet the people behind but just had to trust his guy feeling and his heart. To the surprise of Adam, exactly that factory replied surprisingly fast and with great English skills and they scheduled soon after to meet up in a suburban industrial area of China.

After finding the factory on Google Adam bought a one-way ticket to China, he checked into a shady hotel and went off to meet the owners of the factory. One of the first questions Adam recalls being asked by the Chinese businessmen was what other factories in the area he was supposed to meet and hence how long time they had. Adam replied, that he was not going to meet other Chinese businessmen and that he only wanted to work together with them! They thought he was crazy, but this first meeting turned out to be a life long relationship between the Danish brand owner and the Chinese business family and to this very day Adam is still using that very same factory for producing his high quality sunglasses.

Adam quickly learnt that when doing business with Chinese people it is important to create a strong relationship with them and benefit from the trust you gain to each other. In those few days Adam was visiting the family factory they both went to play basketball with the son of the family, they went sightseeing and they went to a club to party Chinese style. In other words – the family approved him and once you are approved, you are a friend. This relationship has continued to develop further and the Chinese son of the family has even visited Adam in Denmark several times.

ADAM WANTED TO SCALE HIS BUSINESS BY CHANGING THE STATUS QUO 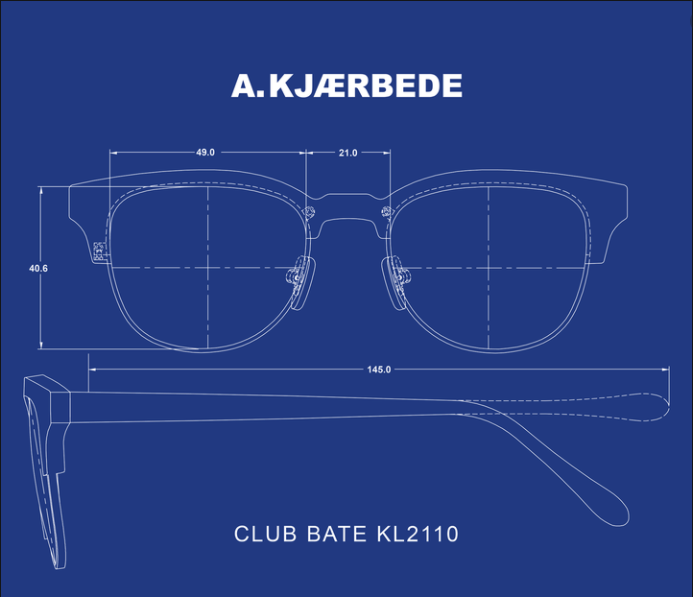 Adam has some professional experience as a sales rep for various brands back in Copenhagen, Denmark. He also knew that if you were a new brand and wanted to sell to shops there were certain rules to follow. You had to buy for minimum amount of stock orders or for minimum amount of money. Adam wanted to change this setup and offer much more flexibility for smaller webshops, stores etc. In stead of forcing them to buy large quantities of his sunglasses he wanted to offer way smaller amounts and let them buy more and large quantities when sold out. Even though Adam took the risk the potential upside was much bigger, as he new they would come back and buy more once they experienced how well his products would sell. Adam also knew that he needed a professionel system to help him achieve his goal and make this order flexibility a reality. He also needed a system, which easily could provide him and the retailers data insights about the best selling products, colors, price targets and designs. His decision was made for Traede and as the system could deliver exactly this for him he started scaling his business year on year. He realized that he suddenly could act as if he had several employees as the system optimized and effectivized his small business. Large international retailers started contacting Adam regarding his sunglasses from A. Kjærbede and wanted to know how many people they were in the organization as they were very impressed with what they saw. When they realized it was only Adam they were very surprised, and even further impressed, often bringing a small smile to Adam’s face.

He also enjoys the two way communication with Traede as his needs are often heard and implemented into the system with new features. The seamless integration to other systems and the backend in Traede delivers further value and smoothness to his daily tasks. He enjoys being in one platform and dealing with ordering, production and billing in one platform at one time. Adam, with his own words, are not the most tech-savvy person, but even him can easily manage to use Traede on a daily basis. He often receives positive feedback from his many retailers as they can easily create new orders in Traede with or without the help from Adam.

A. Kjaerbede has experienced tremendous growth and is now being contacted by large brands/profiles about potential co-labs. He has some of the leading retailers throughout many international regions and constantly growing. They are now represented in more than 15 countries and generates more than 10 mio DKK in revenue.

Adam never really wanted to be an entrepreneur. Or at least, he didn’t pursue or wanted the lifestyle of being one. Merely the contrast. He wanted to be able to do something that brings him joy in life while still having the time to be with his two kids and the family. He didn’t want to work 80 hours a week to not see his family, but maybe have a bigger car in the garage. The most important thing for Adam is to enjoy what you do while still having time and freedom to choose. Not being forced to do something for a silly illusion of success. This is Adam’s raison d’être and biggest advice. As long as he can continue to do this with A. Kjærbede and constantly learn and develop on many levels he will not quit. Maybe he could have grown his brand even faster and further, but for what reason Adam asks? Why not be happy with a little less or maybe not do things in a rush. Great things take time, as a bright mind once put it. What is life worth if you do not have time to do what you want and be with whom you love? Building his own brand is of course hard and tough sometimes, but there need to be more funny days and still time to enjoy life, else, is it then worth it, he retorically asks? With those words we find ourselves at the end of what have been a very interesting and learningful interview, and left with no words to argue against a wise statement from Adam. We thank him and wish him the best of luck with A. Kjærbede.

“Traede has been great at adapting to our needs with new products and new features for our needs.”
Adam Geertsen, CEO and Founder of A. Kjærbede

You’ve come this far. Let’s talk and see if Traede could be a match for your business?

Close Menu
We use cookies on our website to give you the most relevant experience by remembering your preferences and repeat visits. By clicking “ACCEPT ALL”, you consent to the use of ALL the cookies. However, you may visit "Cookie Settings" to provide a controlled consent.
Cookie SettingsREJECT ALLACCEPT ALL
Manage consent

This website uses cookies to improve your experience while you navigate through the website. Out of these, the cookies that are categorized as necessary are stored on your browser as they are essential for the working of basic functionalities of the website. We also use third-party cookies that help us analyze and understand how you use this website. These cookies will be stored in your browser only with your consent. You also have the option to opt-out of these cookies. But opting out of some of these cookies may affect your browsing experience.
Necessary Always Enabled
Necessary cookies are absolutely essential for the website to function properly. These cookies ensure basic functionalities and security features of the website, anonymously.
Functional
Functional cookies help to perform certain functionalities like sharing the content of the website on social media platforms, collect feedbacks, and other third-party features.
Performance
Performance cookies are used to understand and analyze the key performance indexes of the website which helps in delivering a better user experience for the visitors.
Analytics
Analytical cookies are used to understand how visitors interact with the website. These cookies help provide information on metrics the number of visitors, bounce rate, traffic source, etc.
Advertisement
Advertisement cookies are used to provide visitors with relevant ads and marketing campaigns. These cookies track visitors across websites and collect information to provide customized ads.
Others
Other uncategorized cookies are those that are being analyzed and have not been classified into a category as yet.
SAVE & ACCEPT